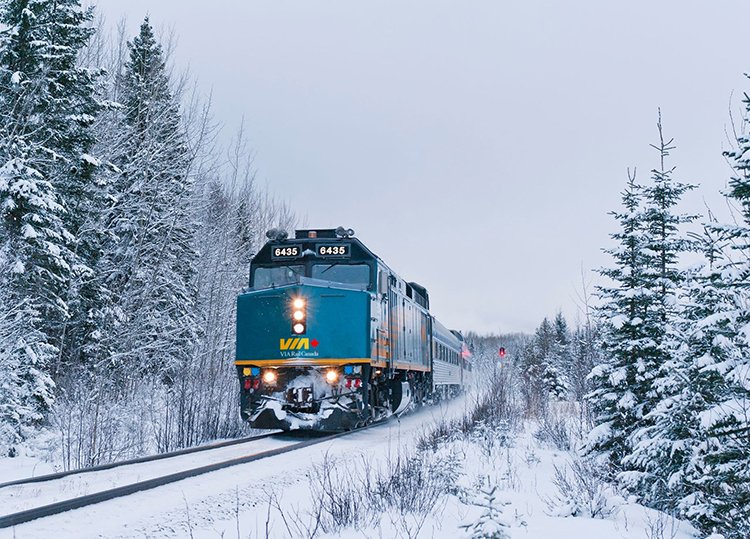 One might think that a locomotive lamp’s main role is to light up the track for the engineer operating the train. While that might be partially true, unlike the headlights on a car, it’s almost impossible for a train moving at high speeds to stop for any obstruction. The main purpose of proper lighting on a locomotive is to warn of an approaching train and properly light up whistle posts and landmarks. Poor illumination can lead to accidents, injuries and loss of life with costly implications for railway companies in terms of legal fees and loss of customer trust, so making sure locomotives have the right lighting solution is imperative.

While mitigating risk is a major reason for choosing the correct lighting for a locomotive, the durability and resulting cost of ownership comes into play as well. Railway companies are always measuring operating efficiencies with an eye toward upgrading and maintaining quality. A good example of this is Via Rail Canada (Via Rail), an independent Crown Corporation that provides intercity rail service from coast to coast. When the company was looking for both exterior and interior lighting to replace the incandescent lamps on its locomotive fleet, they knew they needed a rugged solution that would not only provide high visibility, but also withstand the vibrations of moving locomotives and the freezing temperatures of frigid Canadian winters.

“From the very start, Via Rail knew that Amglo had what it takes to meet our lighting needs,” said Eugen Grecu, Senior Reliability Specialist, Electrical, for Via Rail locomotives. “Amglo was well-positioned within the lighting industry and had a reputation as a reliable vendor that sells high-quality products.”

Amglo’s PAR Series Halogen lamps, used as train headlights and in other exterior locations, were chosen because they are designed to withstand environmental elements and to maintain the mandatory 200,000 candela output required by the Federal Railroad Administration (FRA) and Transport Canada. These lamps are critical for lighting the view of the tracks in front of the train for engineers, as well as illuminating the back. Via Rail uses four PAR 56, 75-volt halogen lamps on the front of every locomotive and two on the back.

In selecting an interior lighting solution for their locomotives, a variety of options were evaluated based on several criteria, including cost, durability, longevity and ease of use. He finally settled on Amglo’s A19 LED lamp. The LED lamp is designed to illuminate locomotive interiors that require bright lighting, including walkways, stairways, engine rooms and electrical cabinets.

“The A19 lamps take less energy – some about six to seven times less than a regular incandescent for the same amount of illumination. They are also less prone to breakage, so they are safer in that sense. And, of course, longer life span is a part of a lower maintenance cost,” said Grecu.

Via Rail’s commitment to providing the best experience possible for its passengers includes updating its own equipment and technology for the comfort and safety of its customers. While cost-efficiency is always a consideration, quality and reliability are just as important – and we are proud to say Amglo lamps deliver both. Read the full case study here.